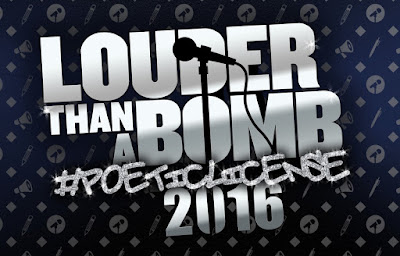 From February 13-March 13, 2016, the family and I were on pins & needles watching my oldest son Zach Lee (stage name: exzachlee; pronounced “exactly”) compete in Chicago’s annual poetry slam Louder than a Bomb sponsored by Young Chicago Authors.  Zach is co-captain of Whitney Young High School’s slam poetry team and this year, he and the team went further than they ever have, moving from the preliminaries to the quarterfinals in the group competition, and Zach reaching the semi-finals in the individual (“Indy”) bouts.
For those who follow me on twitter, I have been tracking #LTAB2016 and posting photos, videos and commentary on some of the poems I have heard and seen performed by some very talented young men and women with lyrical skill and cadence. As I shared in my tweets, LTAB is ground zero for voicing the angst, frustrations, and passions of urban youth. Among the poems recited, I heard from those who were hurt over dysfunctional relationships with mothers, fathers, step-parents, and grandparents. Others shared their frustrations with cheating boyfriends, or their anger over racial prejudice and the violence of their neighborhoods, and exasperation over the cultural slurs people fling at one another in ignorance and sometimes fear. As I heard one poem after another, some with an artistry and rhythm that shined with poetic brilliance, I was struck by how well each performance articulated and described the brokenness of our sinful world.
What was missing was hope. The strength of LTAB is how the artists express with truthful candor the ugliness of life and how wickedly people can act. But it was hard to see a glimmer of light in the midst of such darkness, nor find a redemptive moment in the midst of anguish and pain.
Zach, to his credit, wanted to share a poem which spoke to hope and redemption even in the face of hardship. His piece focused on what good word the Bible has to share in the pit of human struggle. He did not make it to the finals, but below is the video of his semi-finals performance held at the Metro theatre on the north side of Chicago. I hope you are encouraged and blessed by his witness.


Many thanks, by the way, to Park Community Church who posted this video clip on their youtube channel. Soli Deo gloria!