Continuing from the previous entry (“A Day in the Life of a Slave”), here I’m going to make some comments on the Diolkos (or Plan B), when the attempt(s) to cut a canal across the Isthmus (or Plan A) ended in failure. The Diolkos (Δίολκος) was a paved road with tracks that connected the Gulf of Corinth with the Saronic Gulf. By use of a system of pulleys, ropes, and carts, slaves were made to pull up boats from one gulf and drag the boat across 4 miles to the other gulf. 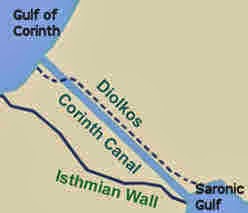 Dotted line shows the path of the Diolkos road

Here is a photo of the remains of the Diolkos along with an artist’s reconstruction of what the system of transport must have looked like as a team of slaves carried vessels from one side of the Isthmus to the other.

Road sign pointing to the site of the Diolkos 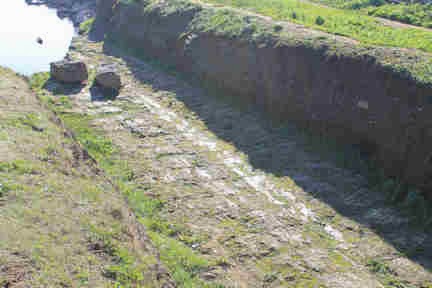 Remains of the Diolkos 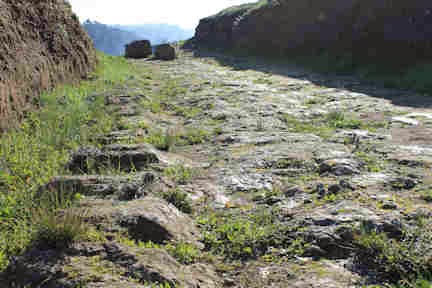 Close-up View of the Road Tracks 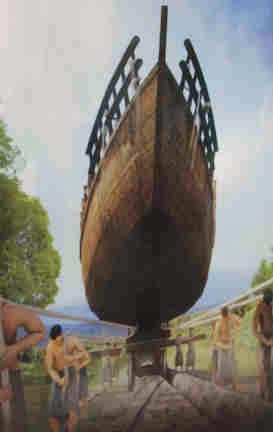 The use of the Diolkos as an alternative way to circumvent the treacherous sea journey around the Peloponnese (especially Cape Morea) had a long-standing history. As early as the 5th century BC, the historian Thucydides reports: “they [= the Greeks of Laconia] themselves being first there prepared engines in the isthmus for the drawing up of galleys, with intention to carry the navy from Corinth to the other sea that lies towards Athens, and to set upon them both by sea and land” (History of the Peloponnesian War 3.5). In the 1st century AD, especially after the failure of Nero to cut the Corinth canal, the Diolkos was used prolifically to transport vessels and their cargo, whether for merchant or military use.
But again, the success of the Diolkos came at the expense of back-breaking, muscle-straining, merciless toil from a slave labor force who were treated no better than oxen. It was another reminder that every successful empire comes at the expense of a slave population who was exploited. The thousands of anonymous slaves who lived and died on the Diolkos are tragically an untold story lost among the accolades of historians which praised Greek engineering. But such was another day in the life of slave. Next post: “The Final Day in the Life of a Slave”

Side note: the artist’s reconstruction is a photo taken from a local gas station located near the canal. According to John Kremidas (Prof. of NT at the Greek Bible Institute in Athens), it’s the only one of its kind. John has tried to contact the original artist and order a poster for himself but can’t find it anywhere in Greece. So many thanks to him for grabbing me when we made a pit stop and showing me the poster at the gas station so I can take this photo.