I just finished writing an essay which was overdue to the editors for another surprise Festschrift, and this was my last tangential publishing obligation. Now my slate is clear to work on my own monograph. Most likely, as I work full-steam on the monograph, I’ll blog about my research here. But I do want to continue cataloguing some of the insights that were born from my time in Greece before I loose the vividness of the experience. So I might be moving back and forth between the topics.
There were several moments in the Greece trip where participants were reminded of how hard the life of slave (δοῦλος) was. While there is a notable range for slaves in the Greco-Roman world concerning the kind of work and living conditions which they experienced (that is, their work could include everything from menial house-keeping chores to hard manual labor; and their living arrangements ranged from the slum conditions of the insulae to the domestic setting of their master’s luxurious villa), for the most part, the Roman Empire was a slave economy driven by prisoners of war. Typically these prisoners were exported from their native lands to different parts of the empire for bone-crunching manual labor in the mines or for the construction of imperial building projects. If they were lucky, they could find themselves in domestic service work (e.g., cooking, cleaning, gardening, tutoring, message delivery, etc.) of wealthy patrons, but often enough, they weren’t. Typically their day began at 3am in the morning and did not end until well into the night.
The back story about the Corinth canal across the Isthmus which connects the Gulf of Corinth with the Saronic Gulf in the Aegean Sea (see the map below) is a good reminder of how brutal labor conditions could be for slaves. But first a look at a modern feat of engineering genius: 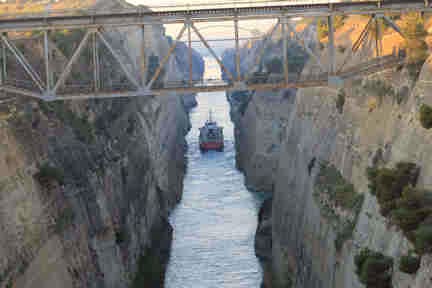 The approximate dimensions of the Corinth Canal is: 4 miles long cutting across the Isthmus; 300 feet deep from sea level to the bridge; its width (= the length of the bridge) 80 feet. Here’s a perspective of the Canal from the bridge with myself as a reference point: 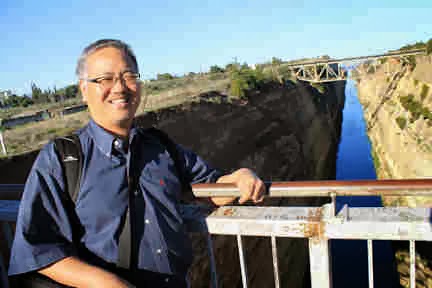 Below is also a sea-level view of the bridge. When boats cross, the bridge submerges under the water until the boat passes and then the bridge resurfaces on top, often with some fish caught on top of the bridge wriggling around frantically for the water: 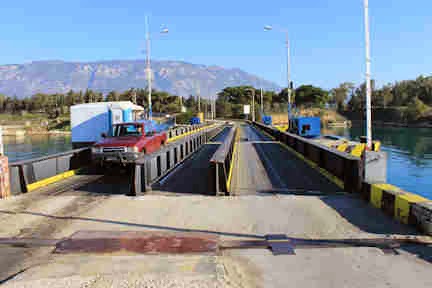 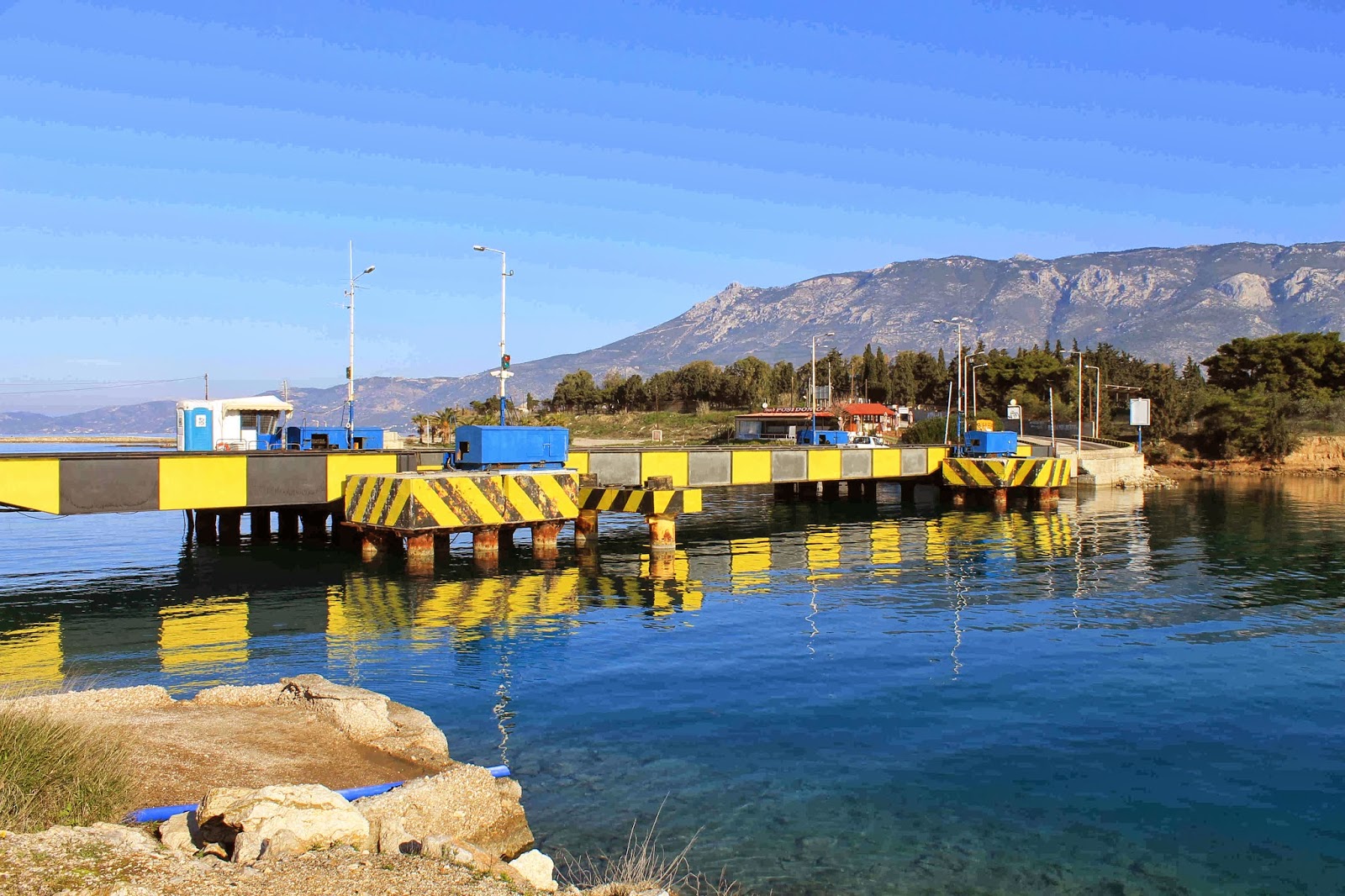 This canal cuts across the Isthmus for about 4 miles: 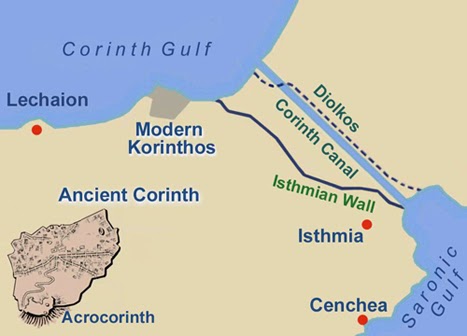 The canal was built over a period of 11 years from 1882-1893 under the auspices of King George I of Greece.
Now the brutal back story: there were several ancient attempts to build this canal before it was finally done in 1893, all of which ended in failure. The most famous attempt is arguably the one by Emperor Nero employing 6,000 slaves (AD 67). Seutonius narrates the opening ceremony when Nero took a spade and made the first dig into the earth which started the project. “In Achaia, he [= Nero] attempted to make a cut through the Isthmus; and, having made a speech encouraging his praetorians to set about the work, on a signal given by sound of trumpet, he first broke ground with a spade, and carried off a basket full of earth upon his shoulders.” (Seutonius, Lives of Caesar, Nero, 19.2; Eng. trans. from the Perseus Project).
The goal was to dig a navigational canal that would allow boats to cross from the Gulf of Corinth to the Saronic Gulf while circumventing the treacherous waters of the Morea (modern Cape Matapan) around which many ships had sank. Seutonius further reports that the slaves could only dig for about 4 stadia (= 2300-2500 feet) before they stopped (in comparison, Strabo says the width of the entire Isthmus is 40 stadia; Geography 8.2). The project was becoming too costly. In other words, too many slaves were dying trying to dig out the canal as they were worked to the bone and eventually the canal became their own sad grave. The project stopped, and it was not finished until the modern era.
To be a slave was a tragic tale. But there is more… “A(nother) day in a life of a slave” continues in the next post.