Last week, I was at the Evangelical Covenant Church’s Midwinter 2017 Conference. With fear and trembling, I was asked to teach on the topic of leadership in the New Testament, and I ended up preparing a message entitled: “Paul as Pastor.” It became a tougher topic to address than I thought because Paul does not really use the word “leader” in any of his letters.
The words for “leader” in Greek are ἄρχων (archōn) and ἡγούμενος (hēgoumenos), translated “rulers” and “leaders” in your Bibles, and refer to secular leadership but not church leaders, with the exception of Hebrews (13:7, 17, 24). Instead of the word “leader,” what Paul does is discuss various leadership roles or pastoral activities using other terms like: 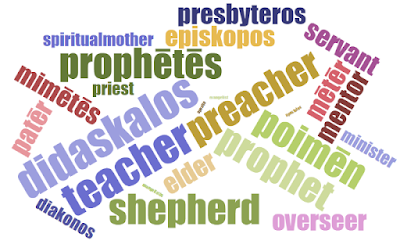 I’ve arranged these 12 terms for pastoral leadership into 4 semantic domains or umbrella categories.
But let’s call the semantic domains something like the 4 ministerial roles, offices, even ministerial “functions” or responsibilities of the Christian leader. I call them the 4P’s of church leadership. Leaders 1) preach, 2) they pastor or shepherd or care for the flock, 3) they prophetically challenge the church and discern what God is doing in our midst,  and 4) they do their priestly duties, administering the sacraments, standing in the gap between God and suffering, but much more. So 4P’s: preacher, pastor, prophet, andpriest, but it is arguably the role of the pastor or shepherd which functions as the core and unites all the other roles and responsibilities of leadership.
I’m thankful that so many pastors, Christian leaders, former students, colleagues and friends at Midwinter appreciated the morning session I taught. Paul sometimes gets a bad wrap among scholars as too authoritarian. But this is really a modern pet-peeve. The solution to bad authority in the secular world is not no-authority in the church but the right use of authority that edifies and redeems. In fact, the more I study Paul, the more I am convicted that he was a premier pastor of the church whose teachings and practices can inform and form our present-day ministerium to become faithful servants of Christ and His body.
I am thinking that eventually this session can evolve into a small book on Paul as Pastor. We shall see. I have to finish my other book projects first. In the meanwhile, one of the most helpful resources on a pastoral theology remains the one written by the late Thomas Oden. His Pastoral Theology (1983) is a classic and still the best on the topic:

Postscript: It pains me to blog so little (probably 1X a month) but until the ATS Accreditation report for North Park is complete, I’m swamped with work. The seminary needs its 10 yr accreditation so we can’t fumble the ball on this one. Likely I can blog much more regularly again when we reach the summer and end of the academic year. MJL