As I am neck-deep with papers to read this entire week, I thought I would make a short remark on the commentaries that seminarians sometimes use as resources for their papers. Taken from an advertisement of the interdisciplinary conference focused on the writings and ministry of Rev. Matthew Henry by the University of Chester, England (July 14-16, 2014), here is a following description on the scope of Rev. Henry’s life and work:

Matthew Henry (1662–1714) is remembered today by two major groups of scholars: by historians as a leading figure among early eighteenth century dissenters, and brother of the diarist, Sarah Savage; and by theologians and biblical scholars for his Exposition of the Old and New Testaments. This monumental work, which had already been published in 25 different editions by 1855, is used widely even today in print and online versions. Yet Henry’s famous commentary is by no means the only expression of his engagement with the Scriptures. Amongst his 30 further publications, most of which were published in the final years of his life (and many of which were later republished with extracts from his letters and diaries by Sir John Bickerton Williams), his many sermons and works on Christian Piety (including the still popular Method for Prayer, 1710) are saturated with Henry’s peculiarly practical approach to the Bible.

Did you catch the date? Matthew Henry was a pastor in the 18th century. This fact alone should raise up some red flags for those using his commentaries on the Old and New Testament for research papers in a seminary or Bible college classroom setting. 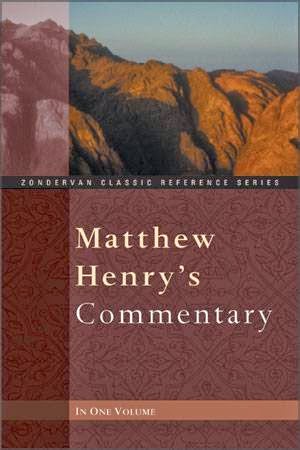 In my NT2 class, I often remind the students that while there might be a plain logic and meaning to Scripture, the (post-)modern reader does not necessarily have immediate access to them. We always have to “mind the gap” between the ancient author and the interpreter of the Bible today, that is, the historical-temporal, cultural, lexical, rhetorical, and experiential gap that a good historian attempts to bridge so the radical edge of the gospel does not get lost on our current generation of Christ followers.
Rev. Matthew Henry was a wonderful English Presbyterian pastor for his time, and certainly his insights on the word of God continue to inspire many pastors in our day and age. However, as a resource for exegetical papers, his commentaries fall short. They are simply uninformed of the many archaeological and textual break-through’s which have change the way we view the New Testament world, let alone, how we interpret the New Testament text. The discovery of the Dead Sea Scrolls alone (beginning in 1946) and how the library at Qumran changed the way we describe 2nd Temple Judaism should give us enough pause to consider sources which take this information and apply it towards reading Paul’s letters and our New Testament books more precisely in their ancient contexts.
So always check the date for your sources, and know who your commentators are, before depending on them for your work and preaching.