I did not expect such a gap between posts, but once I finished grading, there was Christmas, a family getaway, and now I’m frantically preparing for a travel course to Greece this January 3-11… only 2 days away.

But I did want to follow up on the first category of Greco-Roman allusions in Paul’s letters.

When I was doing my post-doctoral studies at Durham University in England back in 2010, my patron and supervisor, Prof. John Barclay, suggested reading what Gerd Theissen had to say about “competitive syncretism” among religions. He pulled off the shelf of his office a copy of Theissen’s A Theory of Primitive Christian Religion (1999) and read to me this excerpt:

“Rivals in the marketplace in part resemble one another when they are struggling to meet the same needs. The same is true of religions in a pluralistic situation. They have to ‘imitate’ one another in order to outdo one another in the imitation. And the imitation comes about by shaping their own tradition as the counterpart of others. I call such an indirect way of reciprocal influence ‘competitive syncreticism.’ ” (p. 49) 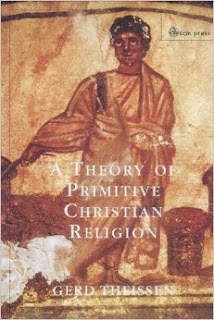 Theissen then goes on to apply this category to the use of the term kyrios in Christian and imperial cult discourse and definitely thinks that Paul articulates his gospel in antithesis to the claims of lordship by Caesar in the cult.

He says: “In my view, the outdoing of power by a competitive contrast and the demonization of devalued ‘rivals’ can best be observed in the relationship between belief in Christ and the emperor cult.” (p. 50)

‘Syncretism’ is loaded-word, however, and too nebulous and slippery a term to be of much use. There is also the conceptual baggage of an older Religionsgeschichtliche Schule or comparative religions approach that is associated with the language of syncreticism from which I would prefer to disengage my work.

In Barclay’s Jews in the Mediterranean Diaspora (1996), he provides more technically precise definitions and terms for the processes of assimilation, acculturation, and accomodation, against which he judges the level of adaptation by various Jews in the Diaspora contemporary with Paul such as Philo of Alexandria, Josephus, and others. Without going into too much detail, Barclay’s use of sociological categories to describe acculturation as “the linguistic, educational, and ideological aspects of a given cultural matrix” (p. 92) is a much more preferable term to describe competitive traditions than “syncretism.”

I myself am not completely convinced, however, that Theissen’s example of Paul’s counter-imperial gospel is indeed the best instantiation of this category. I wrote to this effect in my review of Seyoon Kim’s book Christ and Caesar for the Horizons in Biblical Theology 33 (2011), 90-92. I think what would be interesting is to look at some of the examples in ancient philosophy where competitive acculturation takes place between Stoics and Academics who use philosophical terms indicative of their rival schools to argue that their philosophy outdoes the other at their own epistemological game.

But I think blogging on an example of competitive acculturation in ancient philosophical discourse will have to wait until I come back from my trip to Greece.