[Warning: Going turbo nerd here!] Besides the Gallio inscription at Delphi and the Erastus inscription near the theater at Corinth, another inscription that drew my attention during the Greece trip was the dedication of the butcher shop by the family of Cornelii (Murphy-O’Connor, St. Paul’s Corinth, p. 30). Paul, in his discussion of idol food (1 Cor 10:25) instructs that any idol meat sold ἐν μακέλλῳ (“in the market”) is permissible to eat, although he was willing to relinquish this right for the sake of his brother and sister.
The Greek word μάκελλος is a Hellenized transliteration of the Latin macellum. The inscription dedicating the macellum (meat market) and macellum piscarum (fish market) is supposed to be on display at the Museum on site in ancient Corinth. When I went there, this is what I found (next 4 photos taken by Max Lee at the Corinth Museum © 2014):

Outdoor display at the Museum in Corinth 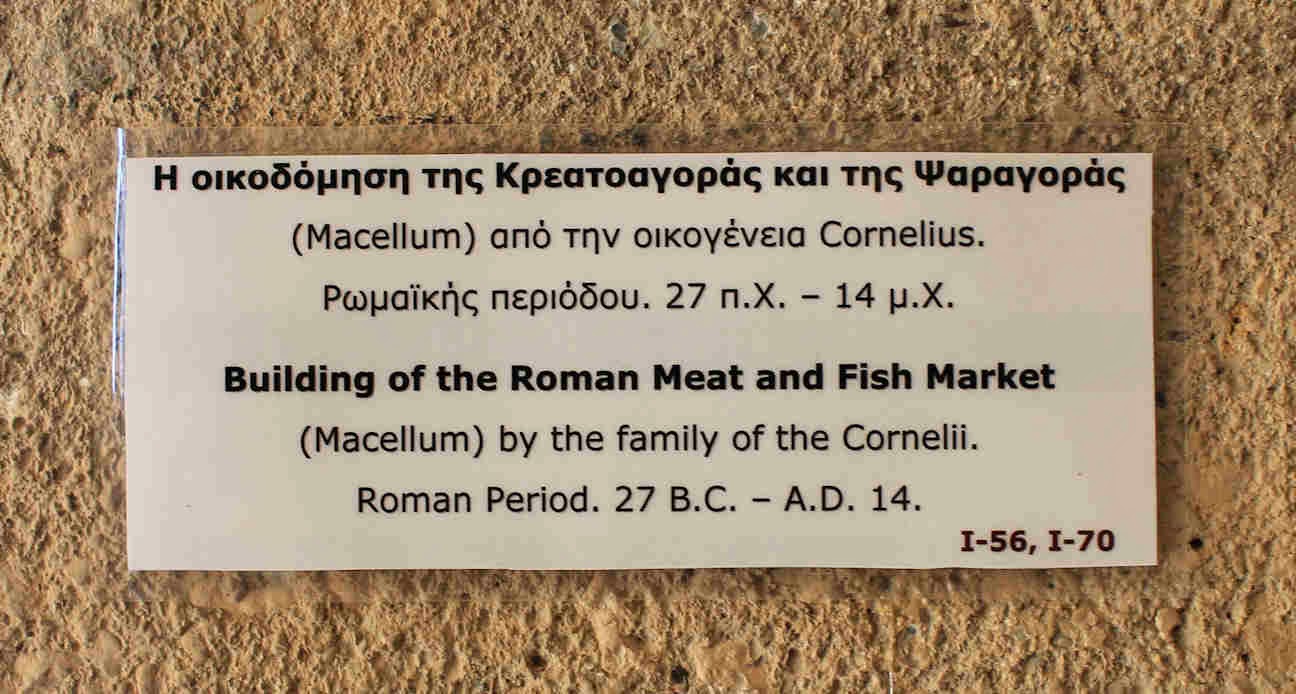 Close up (right-bottom of the display): description/date of the inscription 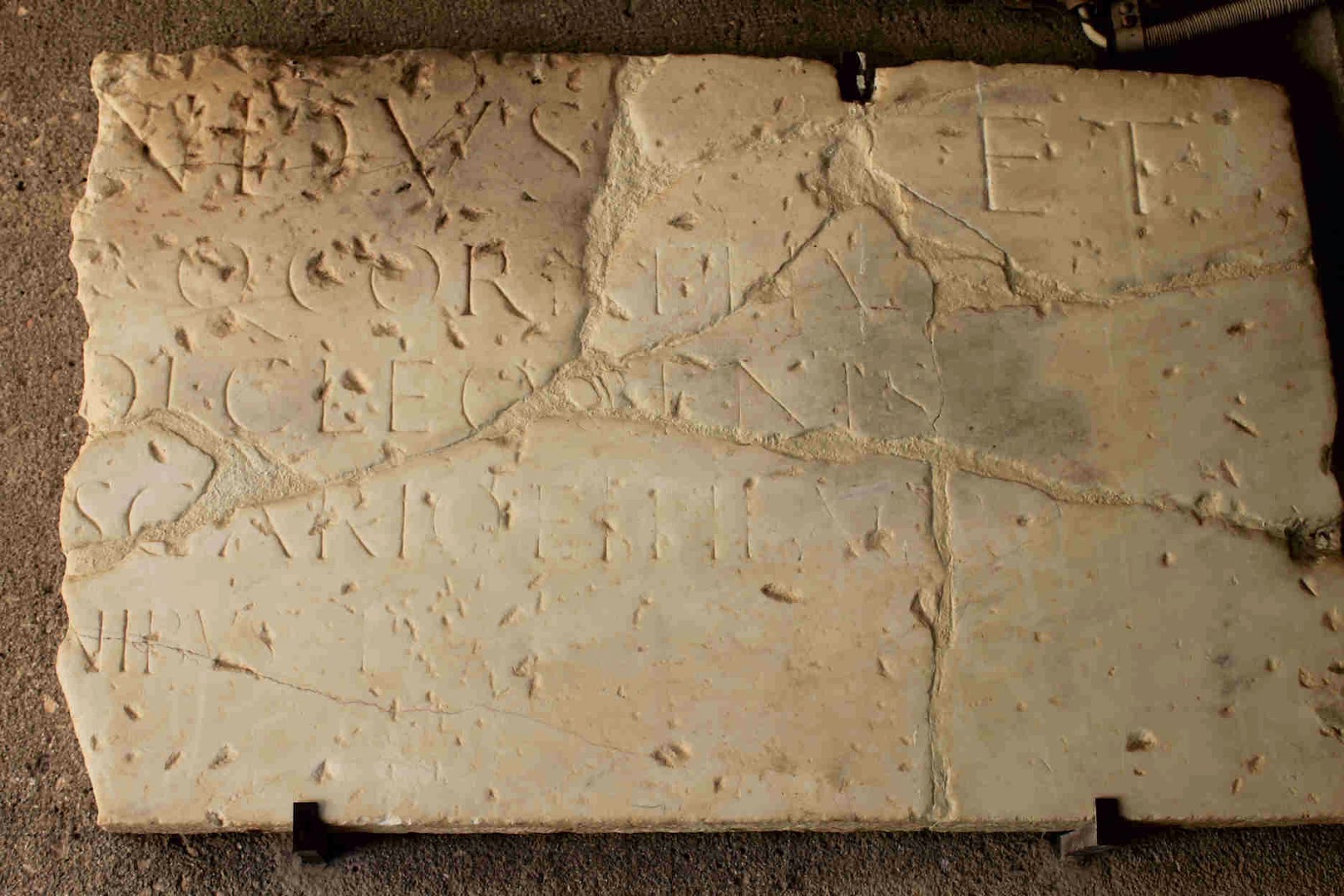 Close-up (right top of the display):
NDVS                         ET
Q CORNELIV
Q L CLEO…ENIS
SCARIO E……
…NIB(P?)V…
And that’s it. Two fragments (one of which is a composite cemented back together) and the display description, and no other fragments. I looked. There was no sign saying that some of the fragments were going to be displayed later and are being prepared (which I hope is still the case because so much is missing!). So my question is: where’s the rest?
In David Gill’s article “The Meat Market at Corinth (1 Cor 10:25),” Tyndale Bulletin 43.2 (1992) 391, he reports and transcribes the fragmentary marble inscription uncovered in 1898. What I have tried to do is take Gill’s transcription and match, to the best of my ability, what I found on display at the Corinthian museum:
Q(uintus) Co[r]nelius [.] f(ilius) [A]em(ilia) Secundus [et]
Maec[ia Q(uintus)] f(ilia) vxor [eius] [.] [Cornelius Secundus
M]a[e]cianus f(ilius) Q(uintus) Corn[elius]
Secu[nd]us f [Co]rn[elia Secunda f eius vxor Q(uintus) M]a[e]ci
Q(uintus) l(ibertus) Cleogen[is]
macellu[m— cum—-] et pi[scario —-]

There are several odd things when you compare the museum display with Gill’s transcription.
1) Some of the inscription that are conjectured by Gill [in brackets] actually appear quite clearly in the display fragments: notably, the family name Cornelius. Where Gill transcribes only CORN—, in both the fragments I saw at the museum, it clearly shows more letters: CORNELIV… Another example is the word for fish (piscarius). Gill transcribes only PI… and conjectures the rest PI[SCARIO]. My photos instead show the PI to be missing and shows alternatively [PI]SCARIO.
2) Secondly, everything in black and especially the crucial word for “meat market” (= the Latin MACELLV[M]) is missing from the museum display. By comparison, the parts of the inscription that are displayed at the museum are shown in red, and even here I’m just guessing.
3) Lastly, the last illegible line of the displayed fragment ..NIB(P?)V… is simply not mentioned at all by Gill and omitted from his transcription.

Did someone make a mistake? Am I even looking at the same fragments that Gill writes about? Did the museum lose some of the fragments? Where is the rest of the inscription? Are the missing fragments stored somewhere? … A million questions were darting through my mind since the one fragment with the word “meat market” was absent from the display.

For the record, the missing fragment with the word MACELLV[M] has been published and a black-white photo of it can be seen in Henry Cadbury’s famous 1934 article “The Macellum of Corinth,”JBL 53/2 (1934), 134-41. If you search the web, in the public domain, this photo (credit: Ferrell Jenkins) can be found of the exact same fragment that Cadbury shows: 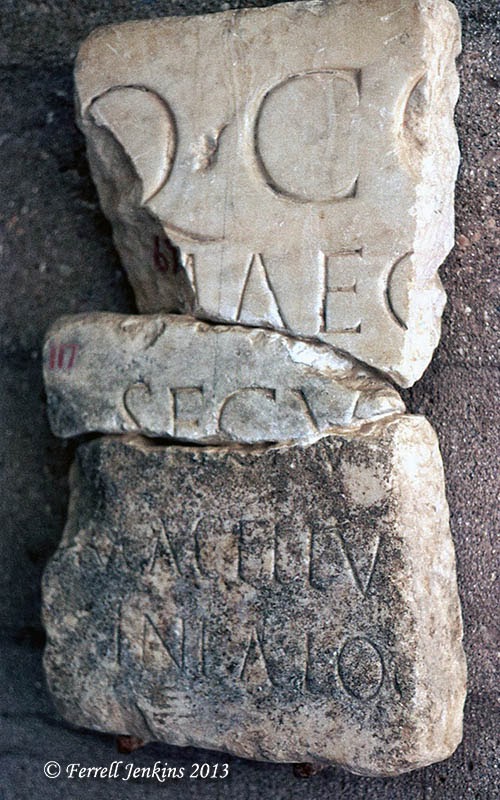 Q CO
MAEC
SECV
MACELLV
INEA LOC
To my disappointment, I did not see the above fragment anywhere in the museum display at Corinth. I hope they did not lose it, and it’s in the museum basement somewhere, ready to be “rediscovered” and put back on display. At least, we know that the fragment exists and is not a hoax.
Well, if anyone who is reading this post happens to be visiting ancient Corinth any time soon, could you please visit the museum on site and see if you can find the above missing MACELLV fragment? Ask the procurator of the museum if they have this fragment on display anywhere or if it is possibly in storage. If you happen to find it, I would be in your debt if you could take a fresh digital photo of it (high res) and kindly send me a copy via email. Many thanks to anyone who can make this happen!
That said, in my next post, I’m going to talk about the proximity of the butcher shop to the temple cult (of Apollo) at Corinth and its relevance for Paul’s teaching on idol food. But it sure is a mystery as to what happened to the missing MACELLV fragment!